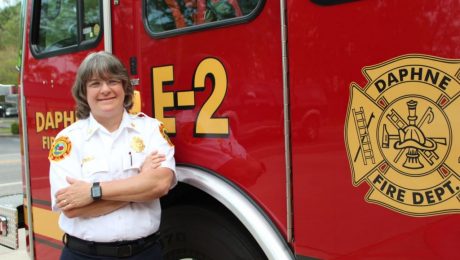 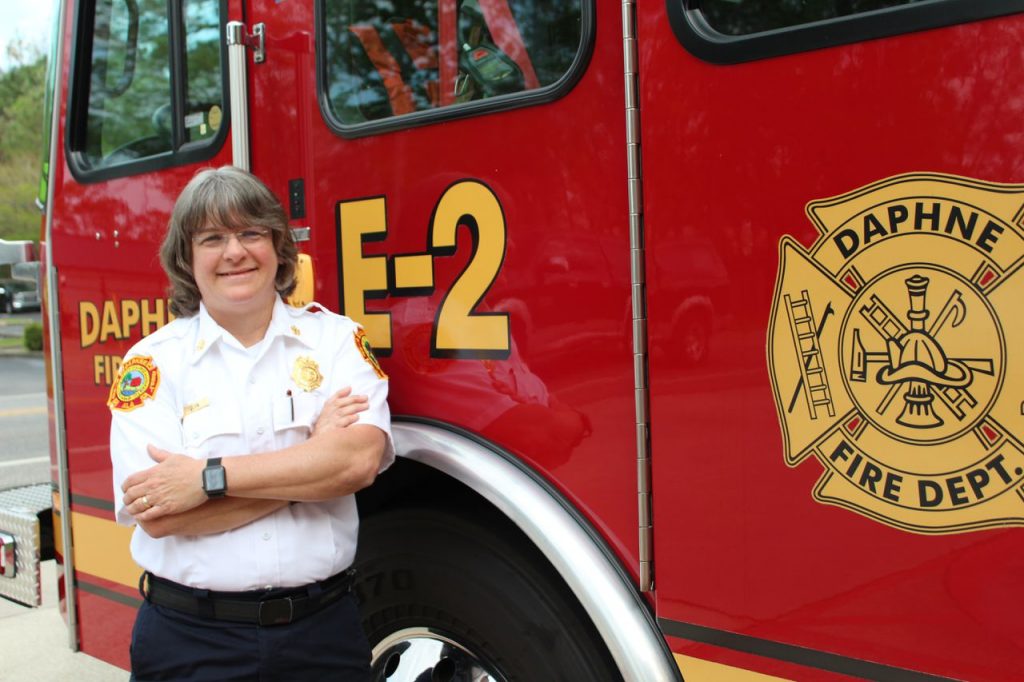 Last year, LeAnn Tacon retired after a 33-year career with the Mobile Fire Department, but her retirement was short-lived. Eight months later, she was named fire chief for the Daphne Fire Department just across the bay. “I wasn’t through,” she says. “I love being part of a fire department.”

Since January, she has occupied a spacious corner office at Daphne’s Fire Station No. 2 – but she only spends about half of her time there, taking care of her administrative tasks. The rest of the time, she’s in her element, either going on calls or visiting the three other fire stations under her supervision. (In June, the newest station will open, bringing the total in Daphne to five.)

When she was offered the position, LeAnn was “ecstatic,” she says. Before she was officially on the payroll, she went around to each station to introduce herself to the 60 or so firefighters working there. Recently, one of them gave her a tremendous compliment when he told her, “I knew you were a firefighter in a chief’s shirt.”

That description sums up what LeAnn is all about. She never set out to be the first of anything, but a plaque in her office given to her upon her retirement commemorates a series of “firsts” in Mobile, where she was the fire department’s first female firefighter, driver, captain and district chief. And now she’s serving as Daphne’s first female fire chief.

“I just love the job of firefighting,” she says.

No one could be prouder of her than her former coworkers – several of whom she trained – at the Central Fire Station in downtown Mobile. They still miss working with her and say she had a tremendous impact on the department. District Chief Jim Cox, who was promoted into her position as district chief, has known her for 20 years and says the fire station “took on her personality a bit” and that he “kind of adopted” her problem-solving skills.

To illustrate how organized she was, he pulls out a binder she made with every detail about how to plan an annual EMS Week cookout, set for May. “There’s stuff she left for us all over because she knew we’d need it,” he says.

“She’s a good person all around,” says Capt. Charles Biggs.

Capt. Mack Weaver says LeAnn has been known to spend her off days mentoring her fellow firefighters to help them prepare for promotions. “She has changed a lot of lives,” he says. “Within our culture, if you get the respect of the men, you’ve done something. She is well respected.”’

Born in Mobile, LeAnn was raised in Montgomery and returned to Mobile, where she attended Murphy High School. She went to EMT school and worked for an ambulance company, where “we would stand by at fires,” she says. During the 1980s, an arsonist was setting fires in downtown Mobile, and LeAnn remembers watching the firefighters “marching in like it was nothing, and they all seemed happy about it.”

One night, as a building burned, she turned to a fellow EMT and said, “I want to do that. Those people love their job. You can just see it.”

She took Mobile Fire Department’s written test and was one of 20 out of 1,000 applicants hired – and she never looked back. “I belonged on a fire truck,” she says. When she retired last May, “I was just as happy on my last day as I was on my first day. It’s the best job in the world.”

Though she was the only woman in the fire department when she was hired in 1987, she insists she was never treated differently. “It was like I had 500 big brothers,” she says. She truly blazed a trail, whether she intended to or not. Mobile Fire Department now counts 23 female firefighters among its ranks.

There were more firsts to come when she was promoted to driver, then almost immediately to captain, then to district chief. LeAnn was the first female to hold any of those positions. “Even when I became district chief,” she says, “I still loved to turn the lights on and go on calls. I still love to do it now.”

Working at a fire station feels like being part of a family. “Firefighters live together every third day, cook, pray and eat together, train together,” she says. “We see some of the worst of humanity and the best at the same time.”

She considers herself to be an empathetic person, which has served her well over three decades of working for a fire department. “We weren’t meant to go through the world alone,” she says. “When someone calls 911, it could be their worst day ever.”

Recently, she received an email from a woman who said the Daphne Fire Department saved her husband’s life. “I sent it to the entire department,” LeAnn says. “Things that seem routine to us aren’t at all.”

And even though she’s in charge, she doesn’t believe in operating with an iron fist, she says. “I want these guys to know someone has their back. I want to inspire and motivate people.”

Among the memorabilia in her office is an American flag made of old hoses from Truck 3, as well as some original bricks and roof tiles from her beloved Central Fire Station in downtown Mobile. There’s also a section of bricks still mortared together, the only thing remaining of a building after a fire she helped fight.

Mack, her former co-worker, retrieved the bricks for her as a souvenir of her courage. “She did her job, she was brave, and she won the respect of an old-timer,” he says – someone who, after seeing her in action, realized she was just as strong and capable as any male doing the same job.

“She was always knowledgeable, fair and positive,” he says. “The biggest fire I ever fought, at the Masonic Lodge, was with her as captain. She’s a real aggressive firefighter.”

Jim, now serving in her former position as district chief, says that, as devoted as LeAnn was to firefighting, everyone knew that the most important thing in her world was her daughter, Bayleigh, now a first-year student at the University of Alabama.

“Her goal when she retired was to buy Bayleigh a vehicle,” he says. “She bought her a nice, four-door Jeep to go off to college in.”

When she was growing up, Bayleigh was considered “the fire department’s daughter,” recalls Mack. “Everybody yelled her name when she walked into the station.”

She once drew a picture of her mom putting out a raging fire, with assistance from a tiny firefighter – Bayleigh – both with big smiles on their faces. The drawing is framed in LeAnn’s office where, years later, she’s still smiling about her career, which she considers to be much more than a job.

“It’s a calling,” she says.
Read more
No Comments